DANCE OF THE DEATH – DANZA MACABRA – DANSE DES MORTS – TODTEN-TANTZ
The Dance of Death, also called Danse Macabre (from the French language), is an artistic genre of late-medieval allegory on the universality of death: no matter one’s station in life, the Dance of Death unites all.
The Danse Macabre consists of the dead or personified Death summoning representatives from all walks of life to dance along to the grave, typically with a pope, emperor, king, child, and labourer. They were produced as mementos mori, to remind people of the fragility of their lives and how vain were the glories of earthly life.
Our Museum book are a fine reproduction of a complete engraved title-page and 44 engravings in the text (complete with the 2 full-page plates “Memento mori” and the transformation portrait showing the death of Dives), all finely colored in a contemporary hand. From a XVII century edition Published by Matthäus Merian the Elder. A work preserving a visual record of the famous Basel wall-paintings depicting a Dance of Death cycle. Dating from the 15th century, they had undergone restoration in the 16th and early-17th centuries. Merian added the “Memento mori” plate as well as the famous final “puzzle” engraving which can be viewed from two directions.
Our book presents all the text of the plates in English, French and Italian language.

The dance of the Death 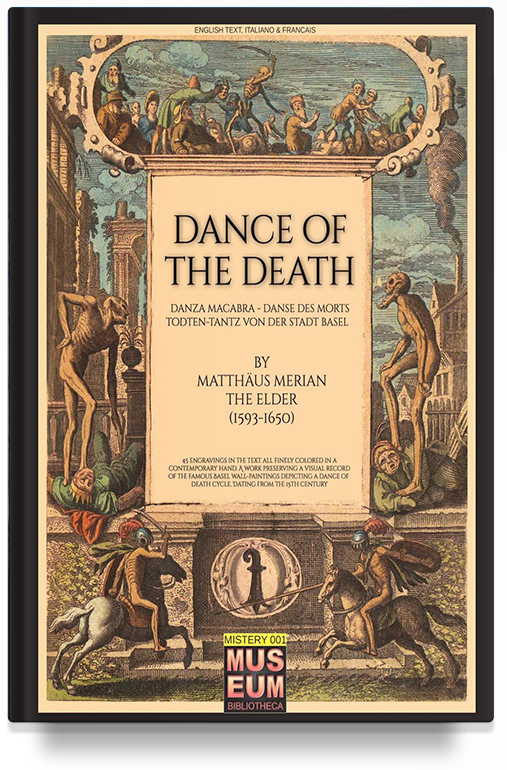